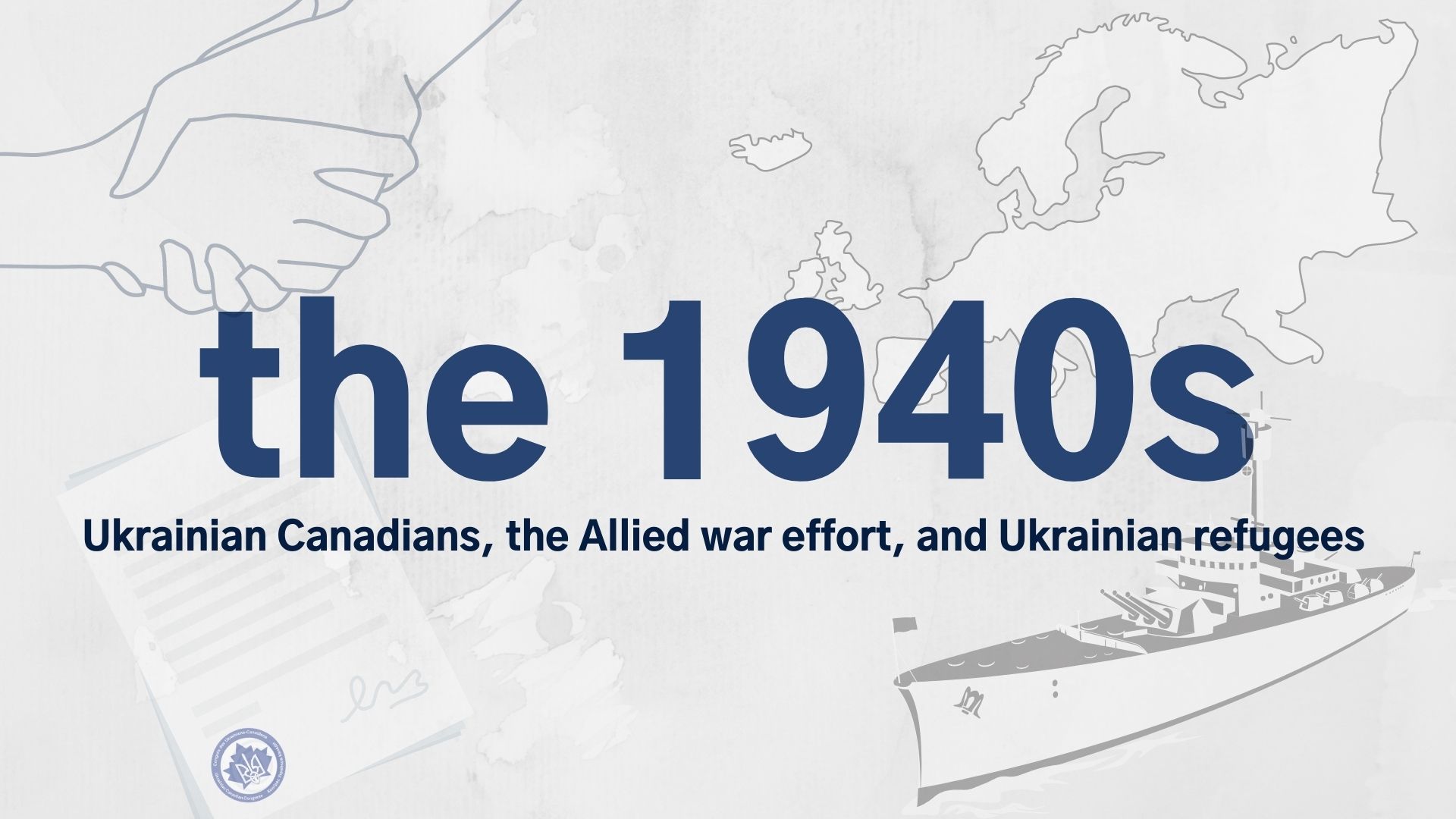 For the second time in two decades, the war came to Europe in 1939.

Germany and the Soviet Union invades and dismembers Poland. Soon after, the Nazi Reich invades and occupies France. In the Far East, the Japanese empire wages a war of aggression against neighbouring states.

In the most brutal war in human history, Canada makes an enormous contribution to the Allied War Effort and the defeat of Nazi Germany, imperial Japan and fascist Italy. From 1939-1945, more than one million Canadians and Newfoundlanders serve in the Canadian Army, the Royal Canadian Navy and the Royal Canadian Air Force.

More than 45,000 would give their lives for the cause of freedom – more than 55,000 would return home wounded. Tens of thousands more would bear the invisible psychological scars of the horrors of war.  Of some 305,000 Canadians of Ukrainian descent – more than 40,000 – or 11% of Ukrainians then in Canada – enlisted in the Canadian Armed Forces.

In the spirit of unity and supporting war effort, Ukrainians came together to form the Ukrainian Central Committee, a new umbrella organization under the leadership of Rev. Dr. W. Kushnir and Rev. Dr. S.W. Sawchuk. It united a community for whom Canada had been home for 50 years, who had brought to the Canadian prairies ancient Ukrainian traditions and had made an indelible contribution to the Canadian landscape.

In June 1943, the first Congress of Ukrainian Canadians, with over 600 delegates, unite under the banner Victory and Freedom.  They unite a community for whom Canada had been home for 50 years, who had brought to the Canadian prairies ancient Ukrainian traditions and had made an indelible contribution to the Canadian landscape.

Dr. Kushnir said at the time, “The community at large can always solve cooperatively what you are unable to do alone.” His words are as true today as they were almost 80 years ago.

On the Western front, the Western Allies liberate Europe from Nazi despotism. With the Allied Forces, freedom and peace returned to western Europe. On the Eastern Front, Stalin’s Soviet Union brought more subjugation, death and oppression to the captive nations of Eastern Europe. Liberation and deliverance from tyranny would come to eastern Europe only decades later with the downfall of Communism and the collapse of the Soviet Union.

Following the Allied victory, nearly two million Ukrainians find themselves as refugees in Europe. To return home to Soviet-occupied Ukraine would mean for them deportation to the Gulag, imprisonment or death.

The UCC presses the Canadian government to give political refugee status to these displaced people and with the help of informed politicians and Ukrainians in the Canadian armed forces, convinces the allies to stop forced repatriation to the Soviet Union. The Ukrainian Canadian Servicemen’s Association, led by Canadian veterans like Bohdan Panchuk, a schoolteacher from Saskatchewan, plays a crucial role in protecting the fate of Ukrainian displaced persons.

In 1948, the Ukrainian Canadian Relief Fund is established and grows to over $200,000, led by the efforts of the Canadian women’s committee of the UCC. The Central Ukrainian Relief Bureau is established in London to channel all relief aid. Financed mainly by the UCC and under the auspices of the Canadian Red Cross, they deal with food, clothing, legal protection, family unification and immigration assistance. Thanks to their support and the advocacy and determination of the Ukrainian community in Canada, over 32,000 Ukrainian refugees would find a home in Canada by the early 1950s.

Here they join established organizations and form new ones. Ukrainian Canadians are united by their language, their culture, their rich traditions, their identity as proud and free people. They are united by their love for a homeland that suffers under the occupation of Communist despotism. They work to build their communities in Canada and support the cause of statehood and freedom for Ukraine. The fight for that freedom would be an enduring part of the Ukrainian Canadian story for the next 4 decades.