In the last week (April 1- 8) six Ukrainian soldiers have been killed and five wounded in 77 attacks by Russian and proxy forces, 19 of which involved use of heavy weapons – mortars and artillery. This increase in attacks has been coupled with significant Russian troop and materiel movements, which have raised concern among NATO and G7 allies about a possible further Russian invasion.

The UCC delegation, led by UCC National President Alexandra Chyczij, briefed Minister Garneau on the current situation and presented recommendations for actions that Canada and allies should take in support of Ukraine.

“We are grateful to Minister Garneau for the opportunity to discuss the latest developments and Russia’s increasing aggression against Ukraine. Minister Garneau underlined Canada’s unequivocal support for Ukraine’s sovereignty and territorial integrity, and condemned Russia’s recent escalations,” stated Chyczij. “To deter further Russian aggression against Ukraine, it is vital that Ukraine’s allies respond strongly and forcefully.”

The briefing note presented by the UCC to Minister Garneau is available here: 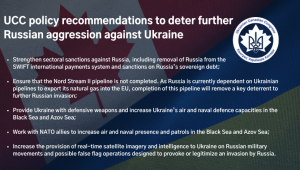