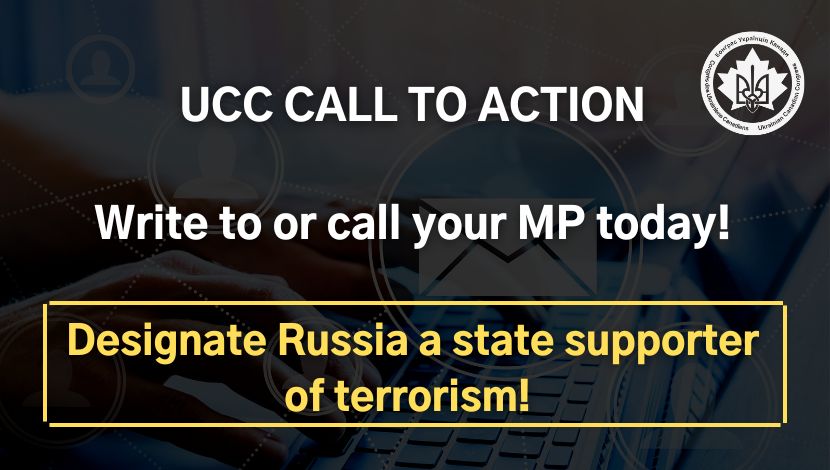 December 5, 2022. OTTAWA, ON. Today the Ukrainian Canadian Congress (UCC) launched a survey of Canada’s Members of Parliament on their support for designating Russia a state supporter of terrorism.

“Russia continues its genocidal war against Ukraine. Unable to defeat the courageous Ukrainian Armed Forces on the battlefield, Russia has turned to a campaign of terror bombing and missile strikes against Ukrainian civilians,” stated Alexandra Chyczij, National President of the UCC. “It is past time for Canada and our allies to completely isolate the criminal Russian regime from the international community. Designating Russia a state supporter of terrorism is an important step in that direction. We urge all Members of Canada’s Parliament to support this designation.”

97% of Russian air and missile strikes against Ukraine have been directed at civilian targets. As more and more evidence of the Russian Federation’s terrorist activity mounts – and overtly terrorist Russian organizations – commit more and more crimes in Ukraine and other places in the world – it is crucial for the Government of Canada to list the Russian Federation a state supporter of terrorism.

CALL TO ACTION – Send your MP an email, call their constituency office or speak with your MP and urge Canada to designate Russia a state supporter of terrorism!

DRAFT EMAIL YOU CAN SEND YOUR MP:

For over 280 days, Russia has waged a genocidal war of aggression against Ukraine, purposely and systematically targeting civilians. Russia is committing war crimes and crimes against humanity on a scale not seen in Europe since WWII. The Russian regime also directs, funds, and supports overtly terrorist organizations.