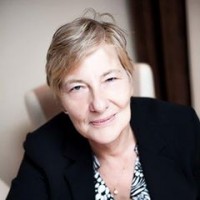 Ann worked at the Government of Ontario for over 30 years and finished her career as the Director of Governance and Accountability. She holds a B.Sc. and MBA from the University of Toronto. Ann is currently a consultant and organizational development expert.

Ann has been a member of Plast from childhood and she began her volunteer work there as a counsellor and troop leader. She has served in several leadership roles in Plast, including as President of Plast Ukrainian Association of Canada. She is currently the head(referent) for international leadership camp for young people – Zolota Bulava as part of the world organization.

With a focus on training and community development, Ann has volunteered for Help Us Help Charity, which works with children from orphanages in Ukraine, for several years where she helped develop workshops for camp counsellors from Ukraine and Canada with a focus on team building, communication and relationship management.

Ann has been active in UCC as a Board member representing Plast, as member of the Executive Committee (2013-16), Chair of the UCC National Governance Committee, the National Secretary and now as the 1st Vice-President. She chaired the organizational committee for the 2019 Triennial Congress of Ukrainian Canadians. She has served as a Board Member of the Canada-Ukraine Foundation.

Ann has served in leadership roles on several election observation missions to Ukraine, including as Head of Mission for the Canada-Ukraine Foundation Election Observer Mission in 2010; as Long Term Observer Coordinator for the 2012 and 2014 Government of Canada Mission Canada Observer Missions.

As a consultant, Ann had the opportunity to work as a civil society expert on the Canada Ukraine Regional Governance and Development Project through the Canadian Urban Institute.

Ann is the recipient of the UCC Leadership Award (2013), awarded for her many years as a dedicated volunteer in the Ukrainian community in Canada, particularly in youth leadership and governance efforts.