November is the month of Remembrance and we are again reminded of the Holodomor — the political act of the Genocidal Famine perpetrated by Joseph Stalin and his Soviet regime in Ukraine in the years 1932-33.  The death by starvation of millions of people, especially children, has left its mark on survivors and their descendants both in Canada and in Ukraine. The study of the sinister history of the Soviet Holodomor, the Ukrainian genocide, is particularly relevant today as we strive to educate the world about different modes of genocide and try to prevent future horrific acts against humanity.

The National Holodomor Education Committee of the Ukrainian Canadian Congress, appeals to individual schools and school boards across Canada to once again commemorate the fourth Friday in November, November 25th, as ‘Holodomor Memorial Day’ in all schools. We also encourage teachers to include Holodomor awareness and education in their lessons at that time. We are enclosing an announcement that could be read in schools during that time in an information pamphlet for teachers. In addition, we have included information on three new initiatives that may be of interest to teachers and students: the Holodomor Student Competition, the Holodomor Genocide Education Conference to be held May 2017 at the Canadian Museum of Human Rights, as well as the Holodomor Mobile Classroom, which offers schools an opportunity to take part in an interactive lesson on a travelling classroom using 21st century technology.

We would be pleased to provide you with further information, resources, curriculum units or speakers, as well as in-service teacher training sessions on the Holodomor by trained Ontario educational professionals.

For further information or for answers to any questions, kindly contact Valentina Kuryliw, Chair of the National Holodomor Education Committee of the Ukrainian Canadian Congress (416-242-5361) or Lydia Falcomer at 416-473-6532. 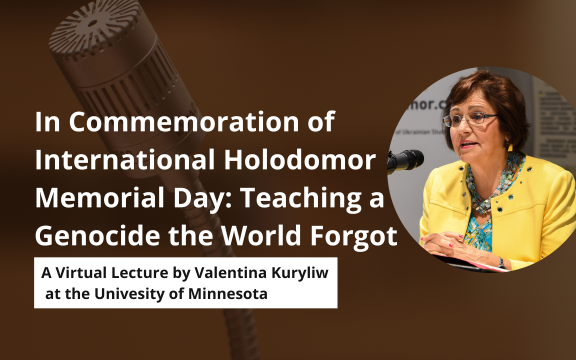