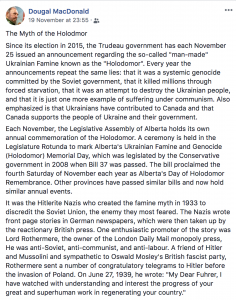 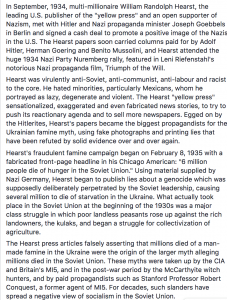 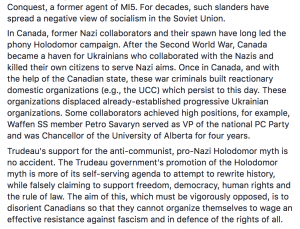 November 27, 2019. This week University of Alberta students along with the Ukrainian Canadian Students’ Union uncovered a series of public social media posts by Assistant Lecturer Dougal MacDonald that call the Holodomor a “myth” and a “lie”. To view some of these posts, please click here.

Despite recognition of the Holodomor by the Canadian Parliament and provincial legislatures across Canada, this is a stark reminder that, even in 2019, we cannot afford complacency in Holodomor education and awareness.

Add your voice to those calling for Mr. MacDonald’s immediate censure and termination from the University of Alberta for his denial of the Holodomor.

Below please find suggested text for an email or letter which can be sent to the President of the University  of Alberta, Dr. David H. Turpin.

Suggested text for contacting the University of Alberta President:

On the 86th anniversary of Holodomor commemorated just a few short days ago, Canadians across the country remembered the millions condemned to death by starvation by the Soviet regime of Joseph Stalin in 1932-33.

Canada was the first nation to recognize Holodomor as Genocide in 2008, and it is one of the five genocides recognized by Canada along with the Holocaust, Armenian genocide, the Rwandan genocide and the Bosnian ethnic cleansing.

This week, University of Alberta students along with the Ukrainian Canadian Students’ Union uncovered a series of public social media posts by Assistant Lecturer Dougal MacDonald that deny the Holodomor as a “pro-Nazi myth” and a “lie”.

I call on the University of Alberta to immediately censure and terminate Mr. MacDonald for his denial of the Holodomor.

Dr. David H. Turpin, President and Vice-Chancellor of the University of Alberta